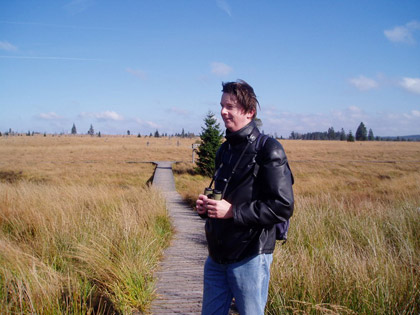 My fascination for nature in general and birds in particular started about 1970 when I was seven years old and came in a rapid at the age of thirteen when I became a member of the "Nederlandse Jeugdbond voor Natuurstudie" (N.J.N.) ("Dutch Youthalliance of Naturestudy"). Birdwatching is still one of my favourite pastimes and twitching is quite fun. A day outside can also be very successful without “heavy” species. Good weather and some new pictures and ideas for new paintings can make my day.

For a young bidwatcher there was still a lot to enjoy in Twente of the seventies. Haaksbergerveen, Twickel, Dinkel en Buurserzand were often visited and at Lake Lonneker, that I visited almost every day, I saw my first kingfischer and osprey. Much later I realized that I had seen the last individuals of some species in this part of Holland, like the last black terns and bitterns at Lake Lonneker and the last breeding great grey shrikes and black grouses of Beuninger Achterveld. I can also remember flowering gentians, bell-heather and spotted ochids at places that have now been changed in roughs and shrubs. Despite these developments Twenthe is still a great place to enjoy nature. The areas mentioned before are all safe and being expanded.

During my study of landscapearchitecture at Wageningen University (1982 – 1988) the reasons behind these declines became ovious: manure pollution, scorching, acidification, poisoning and fragmentation of natural habitats destroyed a lot of nature. These were caused by an everintensifying agriculture that triggered many devastating re-allotments. City-expansion and new infrastructure also added stone, concrete and tarmac to the destruction. Lake Lonneker has now been changed in a manured pond where the noise of the –since 1990- nearby A1-highway never disappears. Fortunately since October 2001 this area is the property of a nature-conservation-organisation, so more threatening (urban) developments near Twenthe Airport can be prevented more effectively.

When I finished my study I started working for a consultancy firm for physical planning at Rotterdam where I have a very varying job and where I can modulate physical developments in a more “green” direction. Sometimes we make beautiful plans for new nature. Nature-development however takes a lot of time and sometimes I envy my urban colleagues who are able to see their plans at “full scale” within a few years.

Since 1990 I live in Gouda, and the Reeuwijkse plassen are now the place for birdwatching. I arrived to late to enjoy the large population of little btterns that once lived here. These birds disappeared during the seventies. But I arrived in time to watch the disappearing of the greet reed warblers (40 pairs in 1990 and 5 pairs in 2006. Since 2014 this bird seems to have disappeared...).

Despite the fact that so much richness has been destroyed, nature in the Netherlands is still extremely rich and diverse, which strikes me especially when I return from a holiday abroad. Extremadura (1990, 2000), Biebrza (1994), Alaska (2004) and Costa Rica (2006, 2007) are breathtaking and almost nothing beats Greece in April (1989, 1991, 2005) but Schiermonnikoog and the dunes of Voorne can compete with these highlights.

New nature is being developped and patience is necessary. I hope to see the final result some day, otherwise my children will. About water-colour During my study of Landscape-architecture, painting in water-colour was compulsory during the second year. The value of water-colour in this particular study is diverse. Water-colour is ideal for fast recording impressions and images and forces to watch accurate and divide essentials and inessentials quickly. Drawing in pencil or crayon also got some attention during this second year but for me they could not compete with water-colour. The unlimited colours and the unpredictable results of working “wet-in-wet” make this technique very attractive. And besides there is no better medium for recording skies and water than water-colour. Especially in Dutch landscapes these elements are often present. The short preparation-time for getting started and finishing with water-colour is also a big advantage. Twenty seconds is enough. And finally water-colour forces to economize; you can not endlessly mix colours (three is the maximum) and correct. Colours become dull or even muddy and the paper gets damaged.

After many years I discovered that the “quickest” water-colours are often the best. Instead of correcting the less successful parts it is often better to start again. A water-colour at A3-size takes nowadays about 10 hours of painting while A2-size takes about 15 hours. Painting an average 30 minutes a day, I finish about one painting each month. Which is just sufficient for one or two expositions each year. My finest hours as an artist were the selection of my Great grey owl (2010), Black Woodpecker (2014), Laughing Falcon (2015) Scops Owl (2018) Bearded Reedlings (2019) and Woodchat Shrike (2021) for the annual Birds in Art-exposition in Wausau, USA. In 2018 my Scops Owl was purchased by the museum and in 2021 my Woochat Shrike. Both are now now part of the permanent collection. To be part of an exhibition next to Lars Jonsson, Robert Bateman en Carl Brenders might be the same experience as being asked as a special guest in a U2-concert, while you’re just an enthusiastic amateur guitar-player.

I usually work from photo’s combining birds and sceneries. For this reason my enormous collection of photo-failures (to dark, to small, not sharp, bird just left the picture, etc.) is very useful and so is the image-browser from Google. Painting gives me the opportunity to add just the sharpness, brightness, colour, action, composition and contrast lacking in the original pictures. Favourite subjects for me are the colours of autumn, dead trees and snow and ice (when starting a water-colour you’re already halfway). Flowers are also irresistible subjects for painting.

I paint almost exclusively at A4-and A3-size on 250 or 300 grams paper. Paint comes from tubes, I don’t like blocks. Mostly I use paint from Windsor & Newton, Van Gogh and Talens. I myself don’t see any difference in pigmentsquality but tubes from Talens get damaged to easily which making a terrible mess.

My favourite brushes are the “selected filament”kind (especcially 3 and 5) and for the greater parts a “cat-tongue” of 22. Very rarely I use white gouache for small corrections or masking-fluid for difficult savings.